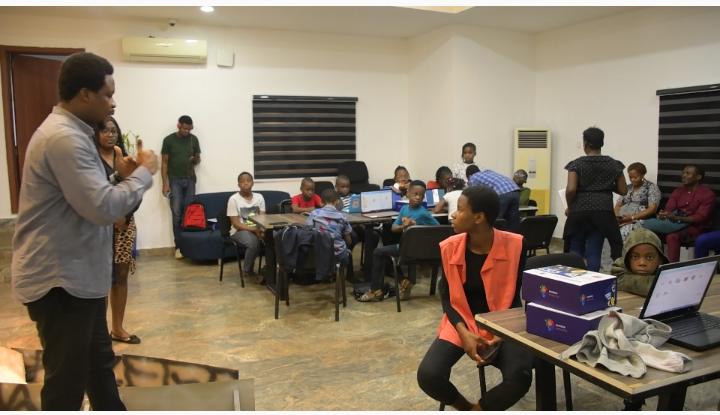 EXCITEDLY, 13-year-old Samuel Mbong clutched his android tablet used to control a robotic car. He had just completed a three-week summer training camp at Venture Park Abuja where he learned how to build robots.

Samuel Mbong, from Calabar, the capital of Cross River State, wants to be a surgeon, but he is also interested in technology.

He plans to use technical skills as a side hustle.

“I didn’t really see it as a future career in its own right, maybe as a side hustle because I want to study medicine and become a surgeon,” he said. CIRI

Mbong alongside 29 other children was trained on how to build a Bluetooth remote control car, using Javascript and Python.

He talked about his enthusiasm for learning and building new things and how summer boot camp exposed him to new skills.

Peace Ukwenya Edward, 15, is another tech enthusiast who, although he wants to study law at university, is considering a career in the tech industry.

Peace, said an indigene of Kogi State CIRI that her parents inspired her to learn technical skills.

During the free summer training camps organized by the Dumena Foundation, young students learned to build and design circuits.

“We designed the circuit driver before we built the car,” she said.

Although an increasing number of students are showing an interest in technology, especially in creating websites, coding programs, developing software and creating artificial intelligence, only a few have been able to access the opportunity to learn technology courses due to the exorbitant fees.

This is the void that a startup like Dumena Foundation is trying to fill.

The Dumena Foundation, an Abuja-based non-governmental organization, strives to provide children between the ages of 5 and 18 with knowledge of robotic engineering and programming.

Executive Director, Kingsley Ezejiaku said that since its establishment in 2019, the organization has educated over 3,000 children in 22 schools in Abuja.

The Dumena Foundation believes that it is very important to introduce children to science and technology from an early age.

Having realized the gap in tech education between Nigeria and advanced countries, Ezejiaku founded the tech startup in 2019 to bridge the gap.

He started by engaging students through online coaching, then realized the need for a physical summer school where students would meet with instructors to learn robotic programming.

“There was a time when I wanted to do things, I couldn’t easily get access to the people I was going to work with. Then, I started to realize that in order to be able to solve this problem, we had to start with education. The problem of tech talent shortage can only be solved by tech education so instead of just studying online or using tech to teach then why not start teaching tech it itself, that’s basically how it started for me.

Ezejiaku said CIRI that Dumena chose to work with the kids during the holidays as a way to build their foundation.

“I thought we could have more impact when we work with younger children than with adults. There are programs designed for graduates, undergraduates, but I think if you start earlier you can have a proper foundation. People like Bill Gate, for example, started at a very young age, so the earlier kids can get involved in this thing, the more long-term impact it can have.

He said the mission of the Dumena Foundation is to put kids between the ages of 5 and 18 on the path to careers in technology.

“In Africa and Nigeria there is a shortage of tech talent and our mission is to fill that gap, so what we are doing is we are building a pool of tech talent in Africa. And this summer school is one of the things we do to achieve that mission.

On Saturday August 27, Dumena organized a running competition for the 30 children who completed their projects.

“This particular summer school is free, all they need is to come with a laptop and of course we asked them to buy a kit which they are going to use for their project, but it was totally free and I can say it was mostly thanks to the support received from Venture Park,” he added.

“The kids just had to come with a laptop and the materials to build their robots.”

On how the organization gets funds to run projects, Ezejiaku said the foundation hasn’t received funding since its launch.

“We don’t have any other sponsor outside of the partnership with Venture Park at this time. We basically finance most of the projects out of our own pockets.

I want to help humanity through tech-participant

Soephanie Ukwenya, 13, who is one of the beneficiaries of the summer training camp, said CIRI that she would be willing to use her technical skills to help humanity.

Ukwenya was happy to have learned the basics of circuitry, construction, Java scripting and programming.

“I’m a beginner programmer, I do some Java programming and scripting, and I’m also interested in building robots. In the future, I hope to help humanity and make their work easier and better.

“It’s fun. I like building robots and I would like to be a robotics engineer in the future.

The only information technology sector contributed 17.92% of Nigeria’s total Gross Domestic Product (GDP) in the second quarter of 2021. Over the past five years, the sector grew by 18% between 2016 and 2019.

Growing from less than 1% of GDP in 2001, the tremendous growth has now positioned Nigeria as the leading technology market on the African continent, with 90 technology hubs and a growing and dynamic clientele.

Bashar Muhammad, a software developer, said foundations such as Dumena that focus on technology education for children would play a good role in boosting the technology market in Nigeria.

“We need more young people in the industry,” he said.

Marvelous Mbah, a computer consultant and coding expert, also stressed the importance of including computer training in the children’s curriculum.

The Robotic Tech skill in particular expands children’s knowledge and helps them in their school career.

Despite Dumena’s efforts to expand access to technological education for children in Abuja, the challenges are many.

One of the main challenges according to Kingsley is funding.

“Funding is our major challenge. We want to grow beyond the summer courses, but before that we need funds.

Dumena is further constrained by limited resources to perform other tasks that facilitate the process, such as the construction of studios, schools and laboratories.

“To make our program more accessible to many more children, there are ways to do that, but it takes a lot of resources to be able to create a low-cost program for children.

“Right now, we’ve just finished building the online platforms, so we’re looking to start creating content. One of the first things is to have a studio where the content is created and along with that we will also introduce robotics skills which can be used for a specific project,” he added.

Dumena is currently building this system on a shoestring budget.

A tech expert, Babalola Shittu, said startups like Dumena are revolutionizing the tech industry in Nigeria, not only providing job opportunities for young people, but also solving critical issues facing the country.

He said teaching children programming and coding would put Nigeria in the same league as other tech-advanced countries.

“The idea of ​​teaching children between the ages of 5 and 18 is a laudable approach and will surely give Nigeria an edge in the future. It will make us a great nation.

Usman Mustapha is a solutions reporter at the International Center for Investigative Reporting. You can easily reach him via: [email protected] He tweets @UsmanMustapha_M