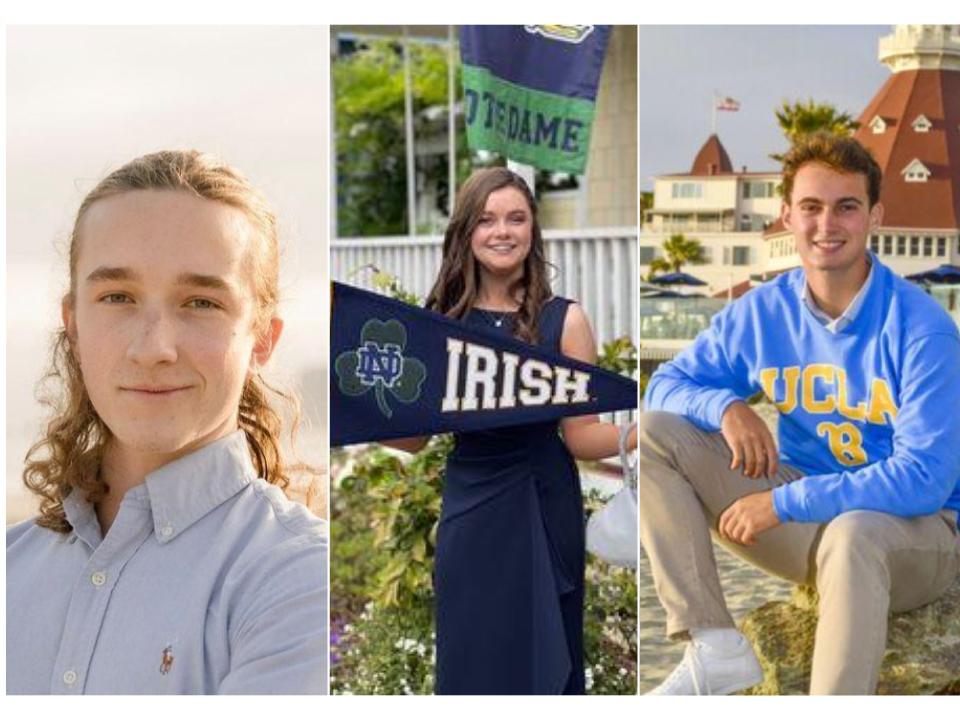 Coronado High School’s class of 2022 has endured trials and tribulations throughout their four years of high school. These students had a relatively ordinary first year, but the second year was cut short due to the COVID-19 pandemic. The junior year, considered the most important for college transcripts and applications, was conducted almost entirely on Zoom. It wasn’t until their senior and final year of high school that they enjoyed traditional activities such as homecoming, puffing, and prom. Through it all, this class was full of brilliant students, scholars, artists, musicians, and citizens destined for greatness in the next chapter of their lives.

Emma Borgie will graduate CHS with a weighted GPA of 4.59. Over the past four years, she has taken a total of 15 AP courses.

“While I enjoyed most of my classes at the CHS, my favorites were those that really felt like a community, where there was some level of camaraderie between students and teacher. These classes felt more like a family and I felt safe to be myself,” Emma explained.

“My favorite high school memory was probably when I accidentally spread a false rumor that my brother Andrew was trying to be the Islander Tiki mascot,” Emma shared. “It happened rather innocently when I said he was a good dancer and would make a great Tiki mascot. Needless to say he wasn’t happy when all these people suddenly started coming towards him and asking him to be the school mascot. It’s a pretty funny memory now that we share, but Andrew, who is rather reserved, didn’t find it funny at the time.”

Emma participated in a wide range of extracurricular activities throughout her high school career. She previously served as treasurer and is currently president of the Junior Optimist Club, vice president of the Crown City Robotics Club, treasurer of the National Honor Society, member of the Flight Club, and former CHS Lunchies participant. Emma was also a member of The Factory travel softball team as a rookie and played for the high school JV and varsity softball teams before learning fencing. Outside of school, she is a member of St. Paul’s Youth Group, plays the ukulele, takes coding lessons, and volunteers at the Coronado Public Library and Habitat for Humanity. Among this list of extracurricular activities, Emma is also a longtime Girl Scout who won her Gold Award last year.

This fall, Emma will join her older brother Andrew at the University of Notre Dame, where she plans to major in aerospace engineering.

When asked what she sees herself doing in ten years, Emma replied: “I hope to be happy, to live a well-balanced life. Right now, that busy future is one where I draw on my life experiences and my studies at the University of Notre Dame to work in the field of aerospace engineering. In fact, my dream job would be to work at NASA. However, I also hope to continue to make a conscious effort to try new things and be an active part of the community.

Nico DiMatteo is looking forward to graduating CHS with a weighted GPA of 4.59. He has 12 AP courses under his belt, and among his favorites were AP Chemistry, Calculus, IM3 Honors, and AP Physics. Mr. Lemei, Ms. Davis, Mr. and Mrs. Castillo and Ms. Kim were among the teachers who had a positive impact on his learning.

“My favorite high school memory was Powder Puff, my freshman year,” Nico shared. “After being on Zoom most of the year, getting everyone together at an event was super fun. My class had tons of spirit and everyone enjoyed the event. It was the first time I felt like everything was back to normal.”

Outside of school and studies, Nico is an all-around athlete and community member. He was a surf camp director and head instructor, a tutor for his high school classmates, and a member of Sacred Heart Catholic Church’s COR team as part of their youth group. He also completed a summer program at the University of Cambridge and studied global business and aerospace engineering.

Along with these extracurricular activities, Nico also played three different sports throughout high school: rugby, soccer, and baseball. He won the 2021 US National Rugby Championship with his U18 club and was selected to take part in a rugby tour of New Zealand. He played on the varsity football team for three years and was personally ranked eighth in the entire state of California in field goal kicks. Third, Nico was a member of the CHS varsity baseball team for three years.

This fall, Nico plans to major in business economics and major in accounting and entrepreneurship at the University of California, Los Angeles.

When asked what advice he would give to students aspiring to graduate at the top of their class, Nico shared, “Students need to find balance in their lives. I was able to find a good balance in my life between sport and school, and it really helped me do well in school. It forced me to be efficient and helped me have fun throughout high school.

With a weighted GPA of 4.33 and a transcript with 12 AP classes, Ian Crozier has been named the Class of 2022 Salutatorian.

“I enjoyed all of my classes and all of my teachers at CHS and all of them made me really invested in learning about every topic we discussed in class. However, no class was quite like AP Physics II. I’ve always loved understanding our world, and physics has always been a great way for me to learn more about how our universe works. AP Physics II was so interesting because it taught me things I didn’t understand before and things about our universe that we can’t even see. We not only learned how light, electricity, magnetism or other phenomena work, but we also learned how it was discovered, making subjects easier to grasp than just their abstract forms,” said explained Ian.

Throughout his high school career, the CoSA Conservatory of Musical Theater and Drama played a vital role in shaping Ian into the student he is today. Taking classes ranging from singing and acting to ballet and acting, Ian had the opportunity to perform in three shows this school year: All stirred, As you like itand The Laramie Project.

Ian plans to pursue a mechanical engineering major at the University of San Diego this fall.

Coronado High School is hosting its 2022 graduation ceremony at Niedermeyer Field at 7:30 p.m. on Thursday, June 16.