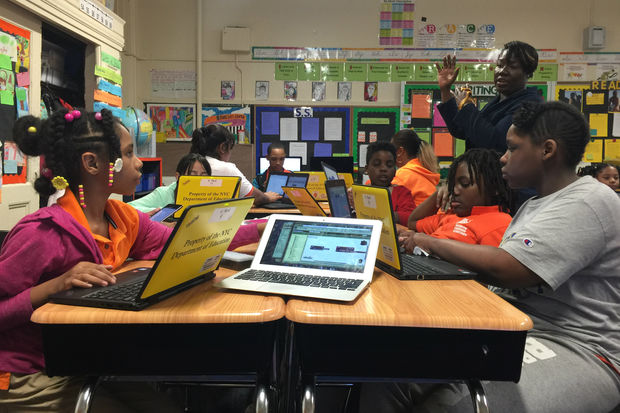 BROWNSVILLE – Watch out for Silicon Valley, you might have some competition.

A group of fourth and fifth graders from Brooklyn Landmark Elementary School enter the world of computer programming early on in a course that teaches the basics of coding, application development and entrepreneurship .

Class started last year for some third and fourth graders and continued this year as students progressed to fourth and fifth grades. And it’s already giving some students, like fifth-grader Christian Isaiah, 10, a sense of the power that comes with being able to create things using code.

Christian turned out to be a quick study when designing his version of the camera app, and said he sometimes added frills to projects. When the class was designing an app that simulated a bouncing ball, they turned it into a pong-like game, with a background full of flames.

“It’s great to be able to do something like this,” he said. “It’s like Steve Jobs didn’t do that. I did that.”

Each class begins with a free period, during which children have the opportunity to have fun and let their creativity run free, before immersing themselves in their work.

On a recent Tuesday, head teacher Everbell Bishop and her colleague Valerie Ford, both teachers at Brooklyn Landmark, walked the students through the creation of a photo app for their tablets.

Each step of the process began with the children huddled on a mat in front of the classroom as Bishop guided them through each initial building block before returning them to their laptops to complete the step.

Starting with a simple ‘take a photo’ function, the kids were then tasked with designing an icon for the app and coding the icon to open the program, before customizing the layout and appearance of the program. .

Some of the kids were eager to show off their mastery of the coding process, shouting instructions to Bishop when they thought she was going too slow, but a quick command of “voiceover!” Ford silenced the class as if they had flipped a switch.

With the help of an inventor of the MIT application, which translates the concepts of block-coding by drag-and-drop, students learn the basic ideas of how to write computer programming, as well as how to solve real-world problems that come with it, Bishop said. .

The class, dubbed Startup Tech, is the only public school class of its kind for fourth and fifth graders, Bishop said. It is funded in part through a grant from Verizon, which was obtained with the help of the United Federation of Teachers Community learning initiative.

The program aims to give children a boost in thinking about their future, exemplified in the classroom by the t-shirts worn by students – some handmade, some official – from schools they wish to attend, including the MIT, the University of Notre Dame, Hunter College and Howard University, among others.

As the school year draws to a close, the young coders prepare for a big showcase, during which they will showcase not only their completed applications, but also their new entrepreneurial confidence, and showcase the applications as if they were presenting a investor.

Christian and several friends are working hard on an app that he says will reward users for community service tasks. It will be paired with a map and GPS function, and users will be able to check in at places like a park and perform tasks like cleaning up trash in exchange for points, he said. He envisions it as something like a neighborhood clean-up Pokémon GO.

Christian said he’s been familiar with web design since before he started the course, diving into the HTML of websites and playing around with coding in an effort to figure out how things work. He said he hoped to use his coding skills to develop video games, but added that the skills he develops in the classroom go beyond computers.

“When I code I have to be precise, so it’s useful when I’m doing math or taking a status test,” he said. “When I have problems, I can think back and figure out how to fix the problems. “

Gabby Billafuerte, 10, said she enjoyed “everything” about the course, especially learning new skills as the course progressed.

“I love learning how to use resources like this,” she said. “I don’t always know what’s coming next, but it’s fun to figure it out.”