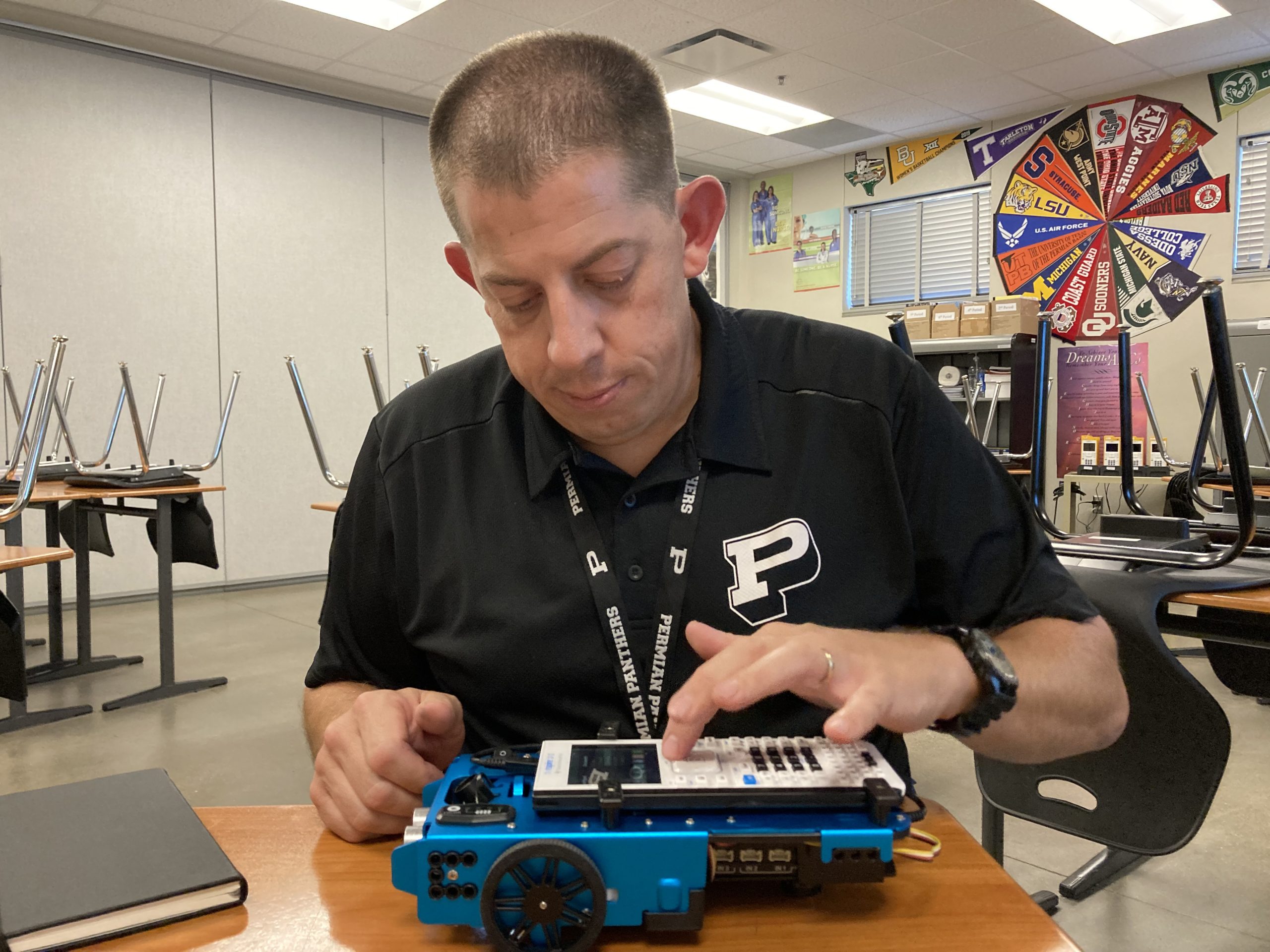 One of the Education Foundation’s largest grants this year went to Permian High School’s math department chair, Patrick Moseley, for Walk the Graph and Moving Cones.

Walk the Graph includes CBR 2s that attach to Inspire calculators. It’s a motion sensor that can tell how far away an object is from it and gives you speed and time information — “just a whole bunch of little information that the calculator can collect,” Moseley said.

“You can then analyze that data, but this particular grant that I wrote, I basically preset a graph in the calculator connected to the CBR unit to the calculator. The student will have to move their whole body to follow this graph in near real time,” Moseley said.

This is meant to help students grasp and consolidate some basic algebra concepts, he said.

“It’s actually a pretty common device. Like I said, it’s a sound sensor. They actually use them in the field because they’re trying to take measurements between different objects. It’s a good tool to use. There are different varieties of it, but this one is really simplistic. I know there are a lot more complicated ones out there,” Moseley said. “It’s very similar to the…radar that police officers used for radar and stuff like that.”

“And that’s where this rover comes in… Basically what it does is I have… a couple of big tables with grids on them and I’m going to set it up to look like to a large grid chart that looks like a coordinate map that the students can use. There will be spots on it where they will direct the rovers through those spots and eventually… they will have to use the rover to push the cone to a specific spot” , Moseley said.

He added that later, as students become more involved, they could then start writing their own programs that will control the rover.

“You can actually set up a track with different colored lines and they’ll follow that with the right program. It’s pretty cool. There are a variety of activities that go along with this one. …,” Moseley said.

Mathematics is not always practical like physics or other sciences. Students need to wrap their brains around this.

“But these devices help students get out of their seats, get them moving and they start to feel how it works and they start to say, oh the incline is there because of these different things that are happening. Yeah, time and they kind of see how time and distance really influence how things behave,” Moseley said.

Moseley said he had training with Texas Instruments that included training on CBRs and rovers.

“…I’ve used the CB RS before. But it’s been a long time. And I actually explored the high school and a few other schools to see if they had any and I couldn’t find any, so I said well I guess I better write a grant for it . Our former department head, I just wanted to get a classroom set of these, and she actually convinced me to get my 10 classroom set of them, which is why this grant is quite significant,” Moseley said. .

He said he was surprised when he found out he got the grants. Other teachers will also be able to use them and it is sure that it will help capture the attention of the students.

He added that other teachers should try to get grants from the Education Foundation. This is his second award in six years.

“They’re only limited by their own imaginations,” Moseley said.

Moseley said he was successful in securing an Education Foundation grant about six years ago.

Permian principal Delesa Styles said she was delighted to find out about Moseley’s award.

“When we learned that Mr. Moseley had received two scholarships from the ECASD Education Foundation, we were thrilled! This speaks volumes about his leadership and innovative “outside the box” thinking. It takes time to write and submit a thoughtful proposal that not only catches the attention of the committee, but also creatively meets the academic needs of our students. Mr. Moseley recently stepped into the role of Head of Permian’s Mathematics Department, and we are honored to have him in such a vital position,” Styles said in an email.

Moseley added that writing a grant isn’t difficult, but it can take time to get the signatures you need.

He added that his training had sparked his imagination.

“Actually, there are more things that I plan to write grants for this year. There are kits that go with it, they’re called the Innovator Hubs. It’s actually kind of a mastermind at the inside of it all,” he said.

“What the student should do is create spreadsheets and different things. It kind of allows them to play around with that stuff,” Moseley added.

Coding will be considered in devices, he said, especially with the rover.

Born in El Paso, Moseley said his dad was in the military, so they moved around a lot. He lived in Germany for a few years and after his father left the service they moved to Odessa where his father was born.

Moseley went to high school in Odessa, earned an associate’s degree in sociology from Odessa College and a bachelor’s degree in mathematics from the University of Texas Permian Basin. He received a Masters in Educational Technology from UT Rio Grande Valley.

Moseley didn’t think he was going to teach, but one of the security guards, Randall Jones, convinced him to fill in, and he was hooked from there. He has been teaching for over 18 years.

“I was pretty good at math. … I did very well in high school and didn’t apply myself very much, I just did what I had to do to be done. College was much more fun – math is much better there. I enjoyed it a lot better – especially after figuring out what was going on,” Moseley said.

Laugh at the right time, Robot. This is how you will truly fit in with humans